A couple of ginger kittens decided to take up home with our neighbours last year. They are now just about adult and curious about everything. And dangerous into the bargain.

We were heading out for a quiet evening walk when we noticed that another neighbour’s house had acquired a ginger cat on its steeply pitched roof. It had obviously scrabbled up a fence onto an equally steep garage roof and leapt across the small gap to the main house. As we watched, it turned to make its way back down, dabbing a tentative paw on the row of tiles below. The tiles, it seems, were slippy, and the cat didn’t like it. The cat headed upwards till it reached the roof ridge. Attempts to come down the far side were equally unsuccessful – the cat was stuck up there. 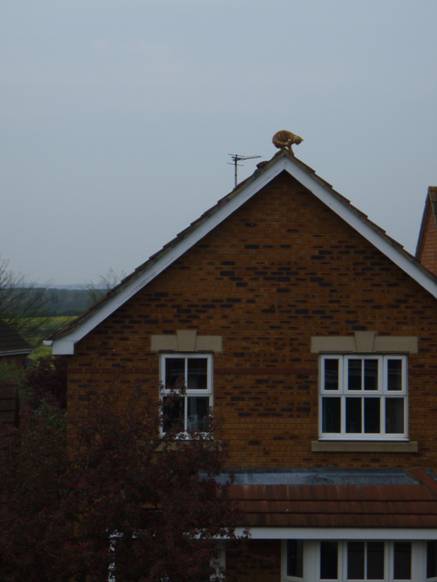 When the owners realised the cat’s predicament, the ladder came out. Up climbed our neighbour onto the garage roof – as slippery to his trainers as the main roof to the cat’s paws. The cat made a few tentative moves towards him but just couldn’t manage to reverse the moves it made to get to that position. Other members of the household tried to tempt it with various titbits, all to no avail. Cats are normally to cool to look terrified but this one was quaking every time it placed a tentative paw on the downward slope.

Eventually the cat decided to chance all with a slithering descent of the roof and a leap over to the garage, narrowly avoiding dislodging the neighbour’s footing. The neighbour edged his way down the garage roof, down the ladder safely to the ground. Happy ending, so why is the DeliveryDemon talking about Risk Management?

Well, in going from fence to garage to roof the cat gave no thought to its ability to reverse the moves. It certainly didn’t think about the consequences of a move going wrong. No way did it consider potential consequences such as:

Cats are egotistical optimists, confident that things cannot go wrong for them, or that the universe will sort things out if it does. When they decide on a course of action, it’s the one which best suits their purpose at the time. There’s no thought of consequences for others, no thought of an exit strategy.

Does this sound like anyone you know? The DeliveryDemon gets very nervous when she identifies a ‘cat’ on a project team. If a team member is making decisions without considering and communicating the knock-on risks to their own work and to others, that’s putting the whole project at risk. That’s one reason why informal project communication is so important – it’s the only chance you have of identifying this feline attitude to risk BEFORE the consequences start to hit.

Do you have any cats on your project team?